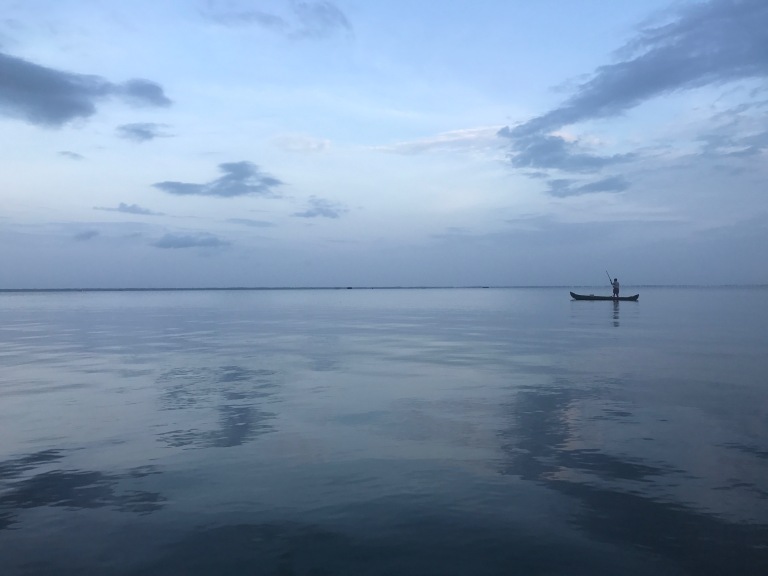 I woke up very early on Friday 27th of July to prepare myself for a long weekend in India. As always, I started my morning with an early morning run. Living in the center of India offers numerous weekend trip options to almost all parts of the country. Pune Airport offers (direct) flights to a lot of major destinations within India. This time we headed to the south, to explore the area’s around the very famous backwaters in Kerala. They position this beautiful state towards tourists as ‘God’s Own Country’. Some marketing phrases are false, but this one is 100% true! And believe it or not, arriving at Kochi airport almost feels as if you are entering into another country. There is, for instance, one thing that you will immediately notice in Kerala: everything is extremely clean. No dirt on the streets and no dust and garbage in public places! Another thing, probably related to the previous point: it seems as if there is less poverty. Everything what makes India so great is there– food stalls, enthusiastic people, vibrant markets. However, Kerala does not have the rough edges that a lot of other places in India do. Knowing a few words of Marathi now and feeling familiar (and comfortable) with some of its sounds, Malayalam, the language that is spoken in Kerala, is really something else. In airports, post offices and other government-run organizations you will see three languages. Hindi, of course, English and Malayalam, a local language which sounds very different than Marathi. Even more interesting is the Malayalam-script. While Marathi is written in the Devanagari-script, Malayalam is completely different. It looks as if two old men drank a bottle of very good liquor and continued their evening by drawing a new script with one rule that they decided to implement: try to avoid straight lines. The Malayalam-script is really beautiful, with fonts in disguise: the script is formed by friendly round forms that create an astonishing south Indian feeling to the street life. Our hotel was situated 12 km’s north of Allepey. The place, Purity, is an old colonial house set at the lake side off the coastal area. The house has been transformed by the owners into a very delicate and tastefully furnished property. It now runs as a deluxe design hotel with a lot of heritage detail. Shortly after our check in, we decided to go for an evening boat trip on the lake, which was marvelous. We brought our luck with us, hereby ensuring there was hardly any rain. We also go a bonus: the skies were painted in beautiful colors. During the boat trip, the skipper demonstrated the Chinese fishing nets, a traditional method to catch fish. On Saturday, we visited Allepey, which is a very sleepy coastal town with some beautiful white churches and an impressive south-Indian style temple. During our trip through the town, we also visited another (Hindu) temple. At this temple, we observed a traditional Indian ritual: they were washing the temple elephant. He (or she) looked very happy, while 4 men were scrubbing him very thoroughly, but the sight of its chained front legs made me a bit sad. These wonderful prehistoric animals should walk freely in the wild! On Sunday, we decided to take a bicycle ride. We left at 10am and came back after 3pm and it was a trip of a lifetime. Cycling around in Kerala is excellent and very safe and easy. The coastal area is flat and very green. Having access to cheap mobile data offers the opportunity to use google maps and it was very easy to navigate and use very small roads to reach the sea. During the trip we experienced nothing unusual, but we had observed some interesting things. While politics in Maharashtra is mainly dominated by the large national parties – BJP and Shiv Sena, PM Modi’s party -, the political landscape in Kerala is different and there is one symbol that will strike you directly. The hammer and sickle, the universal communist symbol is everywhere here! The communist party of India (CPI) is big in Kerala, with a Communist Chief Minister as a result. You will see Communist symbols everywhere and the state is also a host to a lot of cooperative businesses; the Indian Coffee House, a cooperative, has a large footprint in Kerala. One of the other notable things about Kerala is the diversity in religion. The state has a very low percentage of hindu’s. According to 2011 research, ‘only’ 54% of the Kerala residents are Hindus. 26% is Muslim and 18% is Christian, which results in a large variety of colorful churches in the country. Kerala is in South India and typically is the food. Dishes are prepared with coconut oil and they also use coconuts to make the local gravy’s creamier. The Masala Dosa, one of the most favorite snacks of South India, is seen everywhere here! And yes, they eat a lot of (good and fresh) fish. I can easily continue to share more aspects from Kerala that will make you want to book a trip, but I need to finish this post now. So, I will summarize it very briefly: Kerala: it is definitely ‘Gods own country’, and an ideal weekend destination.